The story of silk began more than five thousand years ago in the court of China’s first emperor. It is said that a young concubine named Lei Tsu, by way of experiment, discovered the ‘finest natural textile thread known to man’. The art of weaving silk, first restricted to members of the imperial court spread to lower levels of Chinese society and achieved widespread fame. Gradually a trade route to the west emerged known as ‘silk road’. It wandered through hostile lands and ended thousands of miles away at market places in the middle east. For centuries only the Chinese knew the secrets of silk production and the exportation of silkworms was strictly forbidden. Around 140 BC silkworm eggs and and mulberry cuttings reached Khotan, in present-day Afghanistan, allegedly smuggled by a Chinese princess who went to marry the king and found the prospect of a silkless life unbearable. From then it went to India and a century later to Korea and Japan. Today, Bangalore, India produces the finest mulberry silk in the world and Kanchipuram produces the best known silk saree- The Kanjeevaram.Kanjeevaram doesn’t only depend on weavers to be made, but also on several other industries. Below we explore all the steps involved in making a Kanjeevaram saree. 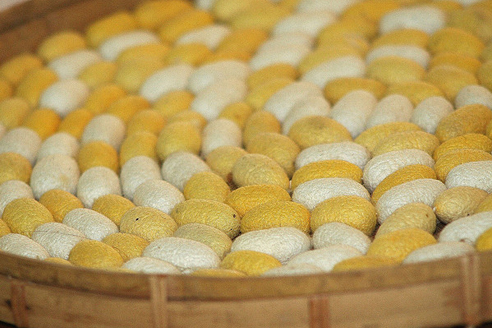 Sericulture is the process of raising silkworms and harvesting cocoons. It is an agro-based industry and its major activities consist of food-plant cultivation to feed the silkworms which spin silk cocoons.Silk worms are not really worms. They’re the larvae of the “bombyx mori” moths and silk worms are domesticated insects. After many centuries of evolution, the inter-bred silkworms are incapable of flight and mates quickly after emerging from its chrysalis. It dies a day or so after laying its eggs.Newly hatched silk worms feed on mulberry leaves only. The silk produced from these worms is called Mulberry silk and the largest producer is Bangalore.

The silk farmer must constantly supply the worms with mulberry leaves as even one missed feeding can kill the sericulture process. Farmers must also spend a lot of time cleaning the ecreta of these worms to keep a healthy environment for them to grow.

The farmers continue feeding and moving around the worms until they get signs that the worms are ready to spin cocoons. For this, the worms are removed from their feeding trays and transferred to harvesting trays. Here, each silk worm will turn over on its back and secretes a steady stream of liquid silk, coated with sericin (protein), which hardens on contact with air. This takes about 40 hours to complete. 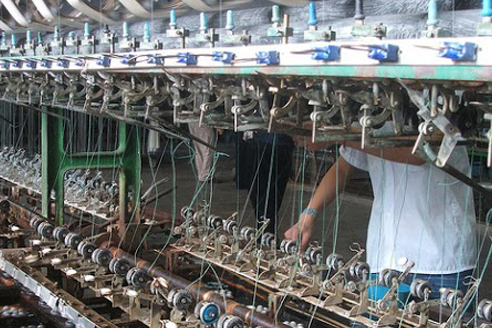 Most of the cocoons from the previous step are used in silk extraction, but some leave the cocoon as moths. The male moths will mate and die once the deed is done, while the females will stick around to lay about 200-300 eggs each.Women are usually employed for the reeling process. With advanced machinery silk is unwound from multiple cocoons at the same time. The women have to be skilled in this extraction process in order to keep the silk filament from breaking. The entire cocoon is unwound to give one long continuous filament of silk, and as such it is the longest known fibre to mankind.This silk thread is continuously rolled on a reel while being extracted. Good quality silk is that which is continuous in its length. 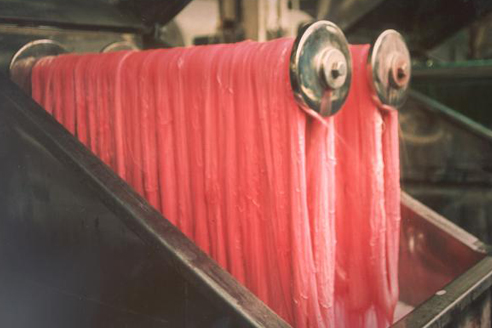 Once the silk has been collected, it has to be prepared for dyeing. This invloves washing and degumming of the silk yarn. Several women and men folk are involved in this process.Most of the dyes are obtained from natural resources(flowers/vegetables) or artificially manufactured colour. The dye is prepared in large vats and are treated before using it on the silk yarns. The silk thread bundles are soaked in the dye vats many times over several days to achieve consistency in the colour tones. These colours are then made permanent by “fixing” them. Silk is also known to have great absorbing power and low colour fastness. That is why your Kanjeevarams don’t bleed colour and can be hand-washed.After the dyeing process, the silk is separated into individuals yarns and wound on spools. 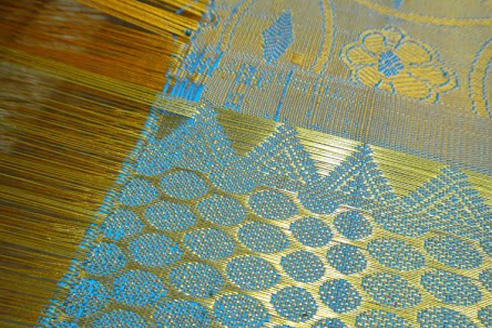 The most characteristic feature about the Kanjeevaram is its Zari. This zari adds lustre and essence to the Kanjeevaram structure.Zari is an even thread traditionally made of fine gold or silver. Today however there is semi-fine zari and artificial tested zari which helps bring down the price of the saree (but at the cost of its look).Zari is manufactured by covering a core yarn of silk, viscose, nylon etc. with gold or silver or copper plated in gold which is flattened to a narrow strip. In another simple method, the silk yarn is just dipped in liquid gold/silver to produce the zari.

The Zari is usually obtained from Surat and the actual zari making process is a long held family secret in Gujarat. 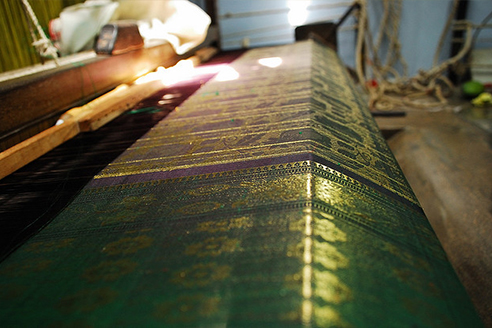 One of the more creative aspects of making a Kanjeevaram saree is the designing part. This is the process in which the colour combinations of the saree is decided, which motifs to use, whether the buttis will be throughout the body or randomly scattered, the type and design of border and the amount of Zari to be used.By putting together several ideas together, a design is produced for one saree. If it has jacquard weave, then the pattern that has to be fed to the computer is also designed meticulously. 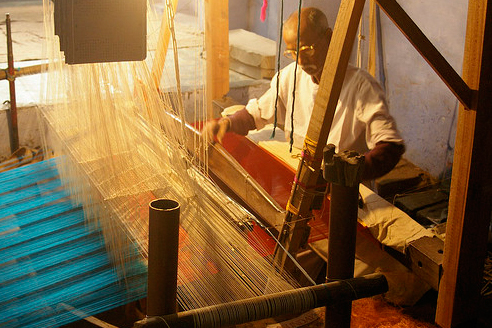 Finally, the saree is ready to be woven. Kanjeevaram has 3 parts to it- body, border and pallu. To weave a saree, 3 shuttles are used as they provide the three sources of silk threads (and zari) for different parts of the Kanjeevaram saree.The silk yarn is first separated into warps (according to colours required) and this forms the warp sheet. This warp sheet is transferred to the weaver’s beam (in handloom) and is called Beaming. In this process, the strands of yarn are stretched out between the reeds and healds.After this, the weaver prepares his weft shuttle (reeling of weft yarn into a small wooden “proton”). Then the weaving is ready to begin on the fly shuttle pit loom.

The weaver will step on a pedal to lift up alternate warp yarns and separate them from the lower set of warp yarns. Simultaneously, he will send the weft proton shooting from one end across to the other, creating one weave (interlock of weft and warp yarns). He then “beats” this line of woven weft down to the woven side of the saree and starts with the next weft weave.

This process will continue until 6 yards is reached. The finished saree is cut out and next saree is begun on the remaining warp. The joints, braiding etc are made manually by hand. If there are intricate motifs in the saree, the loom should be guided manually to produce that design,, and in case of korvai border, more than one weaver will need to manually involve in saree making.

Are you sure want to add?